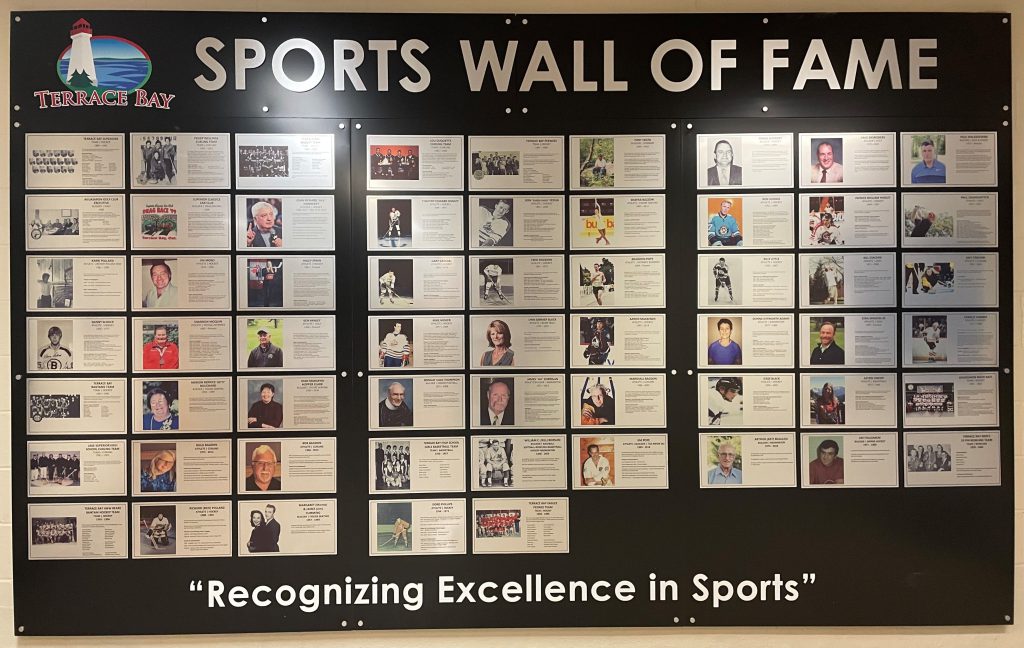 The Township of Terrace Bay is pleased to announce the 2019 to 2022 Sports Wall of Fame Induction Ceremony honouring 13 inductees will be held on:

The Sports Wall of Fame was established in 2016 by the Township of Terrace Bay.

Inductees are recognized by a plaque which contains a picture of the individual, team, or builder along with a condensed biography. This plaque is displayed in the designated area chosen as “Sports Wall of Fame” at the Terrace Bay Community Centre.

ATHLETE Criteria
An individual may qualify by having participated successfully in amateur or professional sport, having performed in such a way as an individual or member of a team, to bring special honour to and foster a sense of pride in the Municipality of Terrace Bay at a community, regional, provincial, national or international level

TEAM Criteria
A team must have attained a high level of excellence and brought honour to and foster a sense of pride in the Municipality of Terrace Bay at a community, regional, provincial, national or international level.

BUILDER Criteria
A builder must have demonstrated consistently outstanding commitment and leadership to athletics or sports as an official, executive, trainer, coach, administrator, teacher, sponsor or volunteer, over an extended period of time (minimum of 5 years).

How to Nominate an Athlete, Team or Builder

The nomination form contains complete instructions including contact information if you have any questions.

Nomination forms to be submitted on or before APRIL 30TH of each year.

Nominations can be emailed to:  sportswalloffame@terracebay.ca

Nominations can be mailed to: